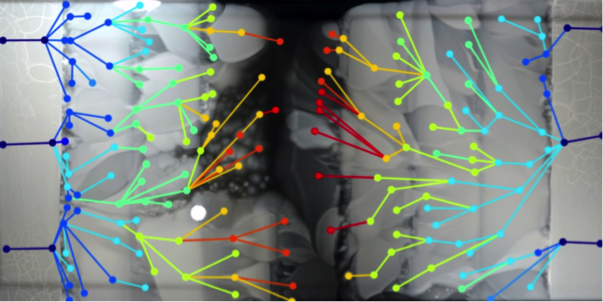 Bacteria survive by evolving and reproducing in order to overcome environmental challenges. However, there is very little information available on how bacteria physically move in order to attain an environment that is suitable for their needs. Scientists from Harvard Medical School and Technion-Israel Institute of Technology have designed a simple way to show how bacteria move as they become resistant to drugs.

The team constructed a 120 by 60 centimeter acrylic dish and filled it with 14 liters of agar to nourish the bacteria as they grow. The researchers divided the dish into nine sections; the outer two had no antibiotics, and the subsequent sections had 10x (just above the minimum needed to kill bacteria), 100x, and 1000x the antibiotic concentration. The bacteria were streaked across the section of the agar with no antibiotic, and were allowed to grow. A camera above the dish took periodic screenshots that the researchers combined into a time-lapsed montage, capturing this process. The dish was named the Microbial Evolution and Growth Arena (MEGA) plate. The MEGA plate was not intended to mirror how bacteria evolve in the real world or hospital settings, but it provided key information about the behavior of bacteria when exposed to increasing drug resistance.

The bacteria spread on the non-antibiotic section of the dish and stopped when they reached the 10x antibiotic concentration. However, a small group of bacteria slowly started to grow in the 10x concentration. This same pattern occurred at each concentration level due to mutations that allowed a small group of bacterium to grow. Although multiple lineages of mutants competed for the same space, only the winning strains were able to start growing in the higher antibiotic concentration. Over a span of 10 days, bacteria produced mutant strains that survived the antibiotic trimethoprim. When the researchers used another antibiotic, ciprofloxacin, the bacteria developed 100,000x resistance to the initial dose. It was also observed that the fittest and most resistant mutants were not always the fastest. This observation goes against the classic assumption that mutants that survive the highest concentration of antibiotics are the most resistant. Therefore, evolution is not always lead by the most resistant mutants.